THE WEB OF TUNISIAN JEWS

A Jewish Tunisian family in the beginning of the century

RECENT HISTORY OF THE TUNISIAN JEWS

Jewish life at the end of the 19th century

French colonization and the Jews

The change of times

Tunisian Jews have always represented a unique culture, due to the the geographical situation of Tunisia as well as by the historical problems encountered by this community. Confronted by rather harsh living conditions, Tunisian Jews have developed along the centuries they spent in Tunisia, a unique and quite interesting personality mainly based on tolerance.  Tolerance to ideas and differences, probably due to the situation of Mediterranean crossroads enjoyed by Tunisia and to the multiple influences and invasions endured by Tunisia during the centuries of sojourn of the Jews in Tunisia.

If we realize that the Tunisian Jews have lived under the influence of the Spaniards, the Arab conquerors, then under the Turks and the French colonizers, notwithstanding all the different invasions of the Romans, Vandals or Byzantine, then we understand much better their internationalist component.
Never exceeding 100.000, among a total population of 5 million people, the Jewish presence in Tunisia has been documented by archeological proofs to exceed 20 centuries. As old as the destruction of the first Jerusalem Temple, the presence of the Jews in Tunisia has received over time the influx of successive immigration waves, mostly from Spain and Portugal at the times of the Inquisition and then from Italy, mainly Livorno.

Jewish life at the end of the 19th century

When we look at history from the perspective of the last hundred years, at the end of the 19th century, Tunisian Jews live in in a state of economical and social decay.

Subjects of the Bey, they are living under the statute of “dhimmi”, which forces them to pay a special tax and keep them as citizens of lower rank in every area. Their houses and synagogues have to be lower in size than that of their Arabic neighbors. The economy is disastrous, commercial exchanges practically non existant and the Jews are subjected to all kinds of vexations from the part of the Arabic population.
Jews survive on a day to day basis, practicing usury and small commerce, confined to the only jobs they are allowed to perform, tailor, shoemaker, ironworker, jeweler, or butcher.
Aside from a few families of rich , the Jews live in La hara, a ghetto surrounded by walls and with doors which are closed at night. Conditions of life are horrendous and very often, entire families live in a small room without any ventilation, sharing bathroom(a hole in the ground)  and kitchen with other families. No sanitary public services are offered, water comes once in a while from a public fountain and the sewer runs in the open in the middle of the street, source of epidemics and multiple hygiene problems.
Education is only assured by old rabbis teaching “Gemara” and “Kabbalah” in Judeo-Arabic language transliterated in Rashi characters.
Tunisian Jews are, for the great majority, a poor community, profoundly religious and simple, surviving more or less on a day to day basis. Mixed marriages with the Arabs are extremely rare and relations between the two groups are reduced to a minimum.
The Jewish population appear close to despair when suddenly everything is going to change.

French colonization and the Jews

In 1878,  the Alliance Francaise Universelle opens its first French school in Tunis with the reluctant agreement of the rabbis who, for the first time accept to share their monopoly with secular studies.

In 1881, the French government, called after a somber story of rebel troops operating at the border with Algeria, decide to intervene militarily and transform Tunisia into a protectorate, forcing the Bey to sign the Bardo treaty in 1881.
The Jews welcome the French, hoping that the newcomers hold the key to their redemption. Everyone is impressed by their culture, their manners and their powerful and modern army, in a word by their "civilization".
After the forces of occupation take the control of the country, tens of thousands of French "colons" arrive, roads and bridges are built, farms sprout, producing wheat and grapes. Commerce develops and the Jews are able to find an important place in this new economical order.
Prosperity soon enough reaches all different levels of society, increasing the quasi natural admiration for the new occupier. Jews, feeling less threatened under the new regime, are going little by little to modify their life styles.


The change of times

First rejecting their traditional ways of dressing, the Tunes embrace the new French fashion. Very soon, it is a complete osmosis that is going to occur between the Jews and the French, projecting the Tunes from a dark era to a time of renewal under the tutelage of the French.

Jews leave the Hara to go and live in the more comfortable apartments and the security of the French quarters. Little by little, they escape from the tight control of religion which they consider now as representing the old values, as opposed to the new ways of living like the French.
Opening of stores belonging to Jews on the shabbat, consumption of non-kosher foods, interest in French music, literature and theatre are going to speed the process of transformation.
The language which was a mixture of Arabic with typical connotations
Hebraic-ital.-Hispanic, the Judeo-Arabic is now only employed by the old people and the "backwards". The new generations go to the Alliance Franchise and to the new French lycees which are sprouting in every major town.
Tunisian Jews start to mingle with the French and try only to express themselves in the language of Voltaire with a French accent and go to the movies and the theatre.
The new generations, who mainly speak French, have a lot of trouble communicating with the old generations and the rabbis who have not been educated in the new culture.
The Tunes play their roles so well that very soon, even some French people think that Jews are fully French. First names of the Jews start to change and Breitou becomes Abraham and then Albert, taking the Tunes on an irreversible route which is going to change their destiny and turn the tide of history.
Jews start to believe that they are from this French culture. A new class of privileged people, Jewish Tunisian Bourgeois comprising all those who have been able to take advantage of the economic boom shows the way to the rest of the population. The dream now is to obtain the coveted French nationality and to belong to this profoundly admired group of blond, blue eyed colonizer.
French culture has so fascinated the Tunes that it became the major contesting force for their moral values, challenging in a couple of generations the Judaism of their ancestors and the Arabic culture where they had lived for centuries. That was the key moment when the loss of identity occurred to reach the majority of the population.

The second world war brings all the disillusions of the Vichy government and the landing of the nazi troops at the El Aouina airport. A total panic seizes the Jews facing the nazi commander who start building a concentration camp, orders   the Tunes to perform forced labor, impose rationing and attract bombing from allied forces.

The nazi commander impose a huge fine on the Jewish community, blaming them for the war and I let you discover the vocabulary he used in his order assessing a fine of 20 millions francs  as well as the proof of payment by an Algerian bank. Maybe it is time to ask for a refund as well as reparations?

Six horrible months of nazi occupation end up with the arrival of the American and British troops, freeing the country and bringing back a much needed period of peace and economic stability. The end of the war bring as well a new French government and a new French administration, anxious to distance itself from the shame brought by Vichy and Petain.

And the commercial activity, soon enough helped by the postwar reconstruction effort reaches a new boom, helping the Jews to forget the bitterness of the war and embark on a new quest towards assimilation. 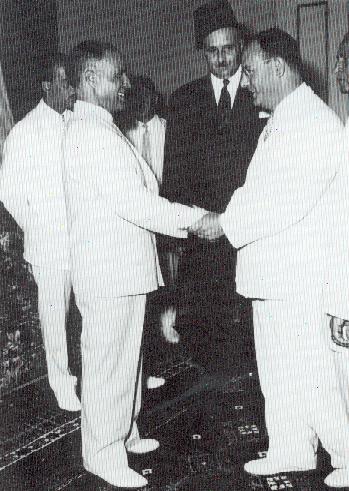 But the truce is short lived because the Arabic Tunisian Nationalistic movement led by Habib Bourguiba get organized with goal to gain independence from France.Between the racism with culture from the French and the volatility of the Tunisian nationalistic renewal, The Jews choose without a doubt France. The new leitmotiv becomes :"One day or another, we will have to leave Tunisia."
The call to leave is really hard to stomach for all the Jews who see everyday many families depart. Three large waves of departures with any furniture they can salvage and 5 dinars($5.00) per person.

Today, Tunisian Jews have remarkably succeeded in all areas of French life and occupy a dominant place in society. This said, mixed marriages represent 50% of all marriages, widening the trend of assimilation and erasing even further an traces of our past.   The new generations, born outside of Tunisia and surrounded by foreign cultures have kept very little of their past and the centuries of wisdom they had accumulated in Tunisia. If the trend continues, combined with with the rampant assimilation, the future generations

would barely remember Tunisia as being the old ancient culture from where one of their grand parents came from.

For any information, critics and commentaries, send an email to : jhalfon@mediaone.net