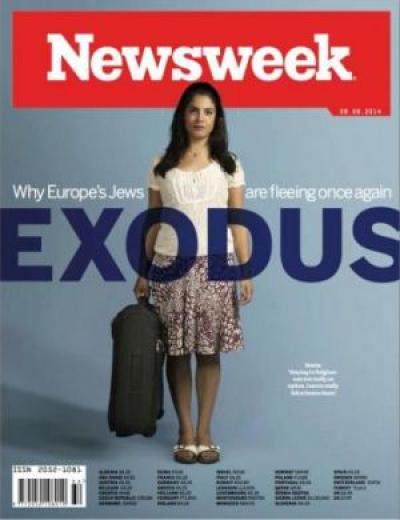 Exodus: Why Europe's Jews Are Fleeing Once AgainLu sur ...

The mob howled for vengeance, the missiles raining down on the synagogue walls as the worshippers huddled inside. It was a scene from Europe in the 1930s – except this was eastern Paris on the evening of July 13th, 2014.

Thousands had gathered to demonstrate against the Israeli bombardment of Gaza. But the protest soon turned violent – and against Jews in general. One of those trapped told Israeli television that the streets outside were “like an intifada”, the Palestinian uprising against Israeli occupation.

Some of the trapped Jews fought their way out as the riot police dispersed the crowd. Manuel Valls, the French Prime Minister, condemned the attack in “the strongest possible terms”, while Joel Mergei, a community leader, said he was “profoundly shocked and revolted”. The words had no effect. Two weeks later, 400 protesters attacked a synagogue and Jewish-owned businesses in Sarcelles, in the north of Paris, shouting “Death to the Jews”. Posters had even advertised the raid in advance, like the pogroms of Tsarist Russia.

France has suffered the worst violence, but anti-Semitism is spiking across Europe, fuelled by the war in Gaza. In Britain, the Community Security Trust (CST) says there were around 100 anti-Semitic incidents in July, double the usual  number. The CST has issued a security alert for Jewish institutions. In Berlin a crowd of anti-Israel protesters had to be prevented from attacking a synagogue. In Liege, Belgium, a café owner put up a sign saying dogs were welcome, but Jews were not allowed.

Yet for many French and European Jews, the violence comes as no surprise. Seventy years after the Holocaust, from Amiens to Athens, the world’s oldest hatred flourishes anew. For some, opposition to Israeli policies is now a justification for open hatred of Jews – even though many Jews are strongly opposed to Israel’s rightward lurch, and support the establishment of a Palestinian state.

One weekend in May seemed to epitomise the darkness. On May 24th a gunman pulled out a Kalashnikov assault rifle at the Jewish Museum in Brussels and opened fire, killing four people. The next day the results of the elections to the European parliament showed a surge in support for extreme-right ­parties in France, Greece, Hungary and Germany. The National Front in France won the election, which many fear could be a precursor to eventually taking power in a national election.

Perhaps the most shocking result was the surge in support for Golden Dawn in Greece. The party, which has been described as openly neo-Nazi, won almost 10% of the vote, bringing it three members of the European parliament.

In parts of Hungary, especially the impoverished north and east, Jobbik is the main opposition to the governing right-wing Fidesz. Jobbik won 14.7% of votes at the European elections. The party denies being antisemitic but even Marine Le Pen, leader of the French National Front, ruled out cooperating with them in the European parliament.

In November 2012, Marton Gyöngyösi, a senior Jobbik MP, called for a list to be made of Hungarian Jews, especially those working in Parliament or for the government, as they posed a “national security risk”. (Gyöngyösi later apologised and said he was referring only to Jews with dual Israeli-­Hungarian citizenship.)

Some saw the Brussels attack and the election results as dark portents. “At what point,” asked Jeffrey Goldberg, a prominent American Jewish journalist, “do the Jews of America and the Jews of Israel tell the Jews of Europe that it might be time to get out?” Around now, it seems… Lire la suite en anglais.