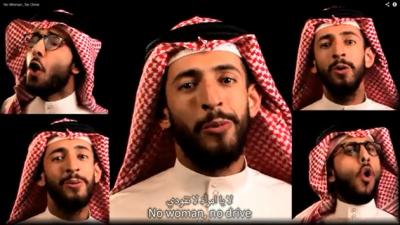 As Saudi women get behind the wheel to protest the ban on women driving in the Kingdom, one comedian has released his own musical take on the issue.

Hisham Fageeh, a self-proclaimed 'artist and social activist' produced an acapella cover of Bob Marley's No Woman, No Cry with a twist, entitled No Woman No Drive.

In the four-minute video posted on YouTube, which also features fellow comedian Fahad Albutairi, Fageeh is seen singing, whistling and even scratching his beard to create the beats of the classic tune.

"I don’t really listen to music, but while studying in the US I heard this song by this Jamaican guy that caught my attention. I decided to do my own rendition; with lyrics relevant to my culture, but without musical instruments. I hope you like it," he jokes in the video.

The lyrics offer a satirical take on the reaction to the ban on women driving.

“Say, I remember when you used to sit, in the family car, but backseat. Ovaries all safe and well, so you can make lots and lots of babies,” he croons, in reference to a controversial statement made by a Saudi cleric last month.

So why did Fageeh make the video? "I was inspired by people's feelings, the general idea of this struggle, and the depth of the "debate," he told Yahoo Maktoob, "The reaction has been nothing but love, from all sides. That's the awesome part."

The video has received more than 180,000 views on YouTube (and growing) and has been shared widely across social networks, topping the videos page on Reddit.