Sociologist Claude Sitbon, do the Jews of Tunisia have reason to be afraid? 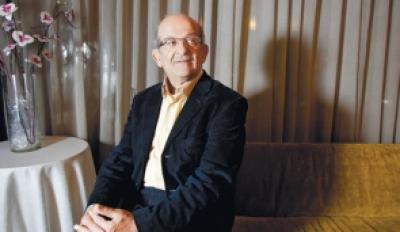 Sociologist Claude Sitbon, do the Jews of Tunisia have reason to be afraid?

Tunisian-born sociologist Claude Sitbon has been tensely following events in his native country.

Sociologist Claude Sitbon has been tensely following events Tunisia, where he was born. He lives in Israel but frequently visits Tunisia, which is now home to 1,700 remaining Jews.

He does not see any real reason for fear in the wake of the popular uprising, since Tunisia is a western country, he says.

Sitbon moved from Tunisia to France in the 1960s, and studied sociology at the Sorbonne. In 1970 he moved to Israel, where he worked at youth aliya institutions and the Jerusalem Fund. He has published books and articles in French and Hebrew about the Jews of Tunisia.

Claude Sitbon, do the Jews in Tunisia have reason to be afraid?

"In terms of personal safety, there is no reason to fear. The main fear of the Jews and others is about the country's political future. Many people say they hope the country will continue to be secular, and the opposition to Islamic fundamentalism is forceful.

"For 23 years, President Zine al-Abidine ben Ali wiped out opposition and freedom of speech. Since 1987, when he took over from Habib Bourguiba, he did some good things, like advancing women's status. He also attacked Islam.

"The Europeans saw his destruction of fundamentalism as a legitimacy stamp, but what they didn't notice until a decade ago was that he did not recognize human rights and even worse, he was corrupt. His wife has 10 brothers and sisters who took control of everything worth something in the Tunisian economy, from the telephone companies to hotels and tourism. It is awful, and I believe that is the straw that broke the camel's back."

"There are two prominent figures in the community. When I called to ask how they were, both were already in Paris. That doesn't mean everyone has left for Paris. When the president was in control, relations with him were good.

"We must remember that in the 1950s, when the community peaked at 110,000 Jews, half left for Israel and half for Paris. Now there are some 1,000 Jews on the island of Djerba and that is very interesting, because they have everything, they have a full community life. There are 700 in Tunis.

"The community in Tunis consists mainly of very old people and there is an old-age home, while Djerba has a much more organized community with direct contact with Israel. They all speak Hebrew."

How was Ben Ali's era for the Jewish community?

"I can't say that something bad happened to the Jews when Ben Ali was president. Moreover, when Bourguiba was in power he set up a senate with a list of notables including a Jewish man, Roger Bismuth.

"From that perspective, you cannot say the ties were bad. He renovated all the country's synagogues. He strengthened the ties with Israel, particularly regarding tourism. The first group of Israelis to visit Tunisia was in December 1993, and I had the honor of joining them. Now there are lots of groups."

Don't the Jews of Tunisia have anything to lose?

"The great fear is that after 23 years of all the elections giving Ben Ali 96 percent to 98 percent of the vote, people won't know how to handle real democracy and real elections. The opposition have been wiped out.

"Now we have a problem because according to the constitution, elections must be held within 60 days, but most of the parties, except for the Communists perhaps, are not ready. So apparently the only alternative is a national unity government.

"Right now I don't see any reason to fear, because the Tunisians are an easy-going people. I have visited more than 10 times in recent years, and I traveled freely in the north and the south without fear - not from what I saw, and not from what I heard."

Could anyone have foreseen this spontaneous uprising?

"Over the past decade, every year the terrible feeling increased that you couldn't speak, that the police were in control, that this gang was gaining control. So people knew the day would come. They didn't know when, but everyone thought that Ben Ali's position wasn't good, that's clear."

Why is Tunisia the first country to have an uprising?

"Don't forget that General Numeiri in Sudan had a similar fate. What happened was a boomerang. [Ben Ali] gave education to all and it turned out that the young man who killed himself in Tunis [thus sparking the uprising] had a college degree. Ben Ali gave them education and it boomeranged. The nation is very western, very cultured. Perhaps that was his undoing. He gave them education but not jobs, so what good did it do?"

Do you believe the Muslims who were oppressed and exiled will return?

"The Tunisians have a sense of humor. In chats on Facebook some suggested that exiled Islamic fundamentalists would return, so women wrote that they would meet them at the airport in bikinis.

"Not just Jews are afraid of the Islamists, the entire country is. In Tunisia women have amazing status. Women wear jeans in the street and bikinis on the beaches, and there are women judges and ambassadors. Women's status is a success story and the Tunisians won't want to lose that."

To what extent did Ben Ali leave his mark on the relations with the Jews?

"His term was very smooth for them. Jewish minorities always lives in fear and when someone spits on them, they prefer to call it rain. You can't say that during Ben Ali's tenure something bad happened to them. It is an open society, very western.

"But Ben Ali is gone and has no chance of returning, so much hatred has been expressed toward him in the last month. It's not that they threw him out, he fled, and that raises questions. The hat is burning on the thief's head.

"You can't say the Jews gained something sweeping during his tenure. There were three or four Jewish businessmen who were close to the president and another Jewish senator that Ben Ali appointed. You couldn't say the Jews had special rights."

Will Tunisia become a real democracy?

"Only fools make predictions. That is what everyone wants but it depends on the political balance of power and on whether the fundamentalists return and enter the political game. That is the big question."