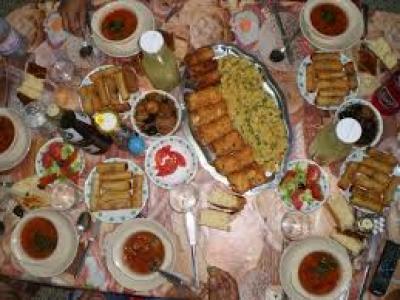 Sylvia Haddad Pryzant of Damascus, Pa., grew up in Tunis, the capital of Tunisia, and always looked forward to Rosh Hashana, the Jewish New Year. “My mother prepared so many dishes for the holiday,” she says. “I especially remember the pumpkin fried with eggs and flour and dunked in honey.” Simone Uzzan Joseph of Tiburon, Calif., also has fragrant memories of her North African childhood. “We always had a table full of grapes, pomegranates, dates and apples to dip in honey,” she says. “Our honey was mixed with sesame seeds, a symbol of multiplication. My mother even took garlic and fried it with honey, the main ingredient for a sweet new year. She used to make an unbelievable holiday jam of pomegranates, roasted almonds and sesame seeds. I long for that kind of taste.”

For these women and most other Jews of Tunisian descent, memory is what remains of their 2,000-year-old North African traditions. The Tunisian Jewish community dates back to A.D. 71 when, according to the Roman historian Josephus, 30,000 Jews were sent there from Palestine by the Roman emperor Titus.

A second influx came during the Inquisition. When Tunisia gained independence from France in 1956, there were about 100,000 Jews living there. Today, between 1,500 to 3,000 Jews still live in Tunis and the nearby island of Djerba, where the last remnant celebrates Tunisian Jewish traditions.

Mrs. Pryzant, 47, who came to the United States in 1979 via stopovers in France and Israel, runs the Four Story Hill Farm in eastern Pennsylvania with her husband Steve. There she raises milk-fed chickens, Cornish hens and veal for high-end restaurants throughout the country.

“In Tunis, my father was a schochet and a mohel,” Mrs. Pryzant says as the roosters were crowing

in the background recently. (Under Jewish law a schochet is a ritual slaughterer and a mohel is a circumciser.)

“The Jewish people would bring crates of chicken to my home and he would slaughter them,” she says.

“They would pluck them at their home.” Memories of her family include chicken couscous at Rosh Hashana with her nine siblings, who would all gather for a feast after the synagogue service.

“The tajines, the salads, the couscous, no one made them like my mother,” she says. “I don’t do the fancy things my mother did, but I create everything from my head.”

Mrs. Joseph, 44, an administrator in the French-American School in San Francisco came to California from Sousse, a seaport 50 miles from Tunis. In Tunisia, Rosh Hashanah was similar to Passover — not the food, but the way it was celebrated.

“We had a Seder, an order for the prayers at the meal,” she says. “My father used to read a sheet of paper given to him at the butcher shop called a ‘feuille de miel’ or honey sheet with the special prayers for all the fruit, bread and wine. This sheet used to contain the full Jewish calendar year together with the Rosh Hashanah prayers.”

Although most Tunisian-born Jews are now scattered throughout the world, they retain strong culinary ties to their North African homeland. Their fish couscous, chicken and lamb tajines and marvelous spicy salads are often all that remains of their Tunisian background.

Even these recipes have been adapted to the taste sensibilities of their adopted countries. Harissa, for example, the Tunisian hot red chili sauce that once varied from village to village and even family to family, is often spiced with American, French or Israeli generic hot sauces. It is almost impossible to find bejma, the delicious triangular holiday bread that is formed into three balls during the year but shaped like a ladder at Rosh Hashana.

Many of the dishes that took such a long time to prepare are today only a memory.

Among them is couscous with beef, chicken and chickpeas — an elaborate stew with broth, hand-rolled couscous and meat and vegetables. It used to be an all-day affair to make the boulettes (meat patties) stuffed into artichoke or green bell pepper halves, soup and the couscous rolled by hand.

“At Rosh Hashanah, my mother always served a chicken stew with couscous with lots of vegetables, celery, turnips and tiny, tiny noodles, half the size of a pea, that she would roll around her fingers,” Mrs. Pryzant says. Today she rarely, if ever, makes the couscous stew and buys the ready-made couscous in the store.

Mrs. Joseph, who keeps many of the recipes alive for her children, often consults harissa.com, an Internet site for Tunisian Jews. Some traditions live on only in her memory.

“To make a stuffed stewing hen, we used to buy the hen with all its insides. My mother very patiently used to empty it through the neck cavity. It contained a lot of eggs, raw and cooked, plus spices. I remember seeing her, sewing the neck cavity.

With a needle and some regular thread, she was doing an embroidery job; she was meticulously stitching so that the egg mixture did not escape.

This dish was absolutely delicious. It was cooked in a soup base broth with some celery and some homemade pasta.”

Mrs. Joseph may not prepare all the dishes from her past, but she prepares some.

At Rosh Hashanah she cooks the head of a fish, which symbolizes being at the head, not the tail, of the new year. “It will never be the same,” she says. “Today we change countries, gather friends, the foods may be even better because California has everything.

“Success for me is incorporating food memories into the future for my children. We can’t let the memories go, but it is so hard in America where you are away from everyone in your family.”

This recipe is adapted from “The Foods of Israel Today” by Joan Nathan (Knopf).

Dissolve yeast and 1 teaspoon sugar in 1 cup of water in a large bowl or the bowl of an electric mixer. Stir and let proof for 10 minutes.

Stir into the yeast mixture 3 of the eggs, the vegetable oil, salt, the remaining sugar and another ½ cup water.

Slowly work in enough flour, kneading to make a soft, tacky dough. Using your hands or the dough hook on the mixer, knead for 10 minutes, or until smooth. Turn out onto a floured board, then place in a greased bowl and let the dough rise, covered, for 1 hour.

Punch down the dough and divide into 9 rounds about the size of tennis balls. Place 3 rounds together, touching, to form a triangle on a greased cookie sheet.

Repeat with remaining dough. Let rise, uncovered, for about 30 minutes.

Beat remaining egg and brush the dough with the egg wash. Bake in 375-degree oven for about 20 minutes, or until golden.

Makes 3 breads, about 8 servings per loaf.

1 teaspoon coarse salt or to taste

Cut off stems and soak the peppers in warm water until soft. Drain and squeeze out any excess water. Then grind them in a meat grinder, as North African Jews do, or process in a food processor with a steel blade with ¼ cup olive oil, garlic cloves, cumin, coriander and salt.

The consistency should be a thick puree, the color of deep red salmon. Place in a jar and pour on remaining olive oil. Cover and refrigerate.

Let sit for a few days before using, until the harissa becomes less opaque. Use sparingly as it is very hot. Makes about 1 cup.

½ pound potatoes (about 2 medium), cooked and cut in 4 pieces

½ teaspoon harissa or to taste

Boil carrots in enough water to cover for about 20 minutes, or until tender. Cool, cut into thin rounds and place in a bowl.

Peel cooked potatoes and cut into small pieces. Add to the bowl. Add harissa to taste, cumin, garlic, lemon juice, salt to taste and olive oil. Let sit for a few hours. Just before serving sprinkle with the cilantro. Makes 4 to 6 servings.

Toss onion, parsley and salt together in a bowl. Let sit for 15 minutes to bring out the juices. Drain well and return to the bowl, then add the ground beef or lamb.

Meanwhile, cover the bread slices with water in another bowl and set aside for a few minutes. Then squeeze out the water and fold the bread into the onion and meat mixture.

Dissolve saffron in 1 teaspoon of water and add to the meat. Stir in 1 of the eggs, 3 tablespoons tomato paste, pepper, cumin and cinnamon. Mix well with a spoon or, better yet, with your hands. Shape about 2 tablespoons of meat into a meatball, pressing meat into artichoke bottoms and pepper slices.

Beat remaining egg in a small bowl with 1 more tablespoon of tomato paste. Sprinkle flour into another bowl. Dip the meatballs into the egg mixture, then into the flour.

Heat ½ inch oil in a large skillet. Fry the meatballs until they are brown on all sides. Drain on paper towels. After all the meatballs are cooked, place them in a large, wide pot. Stir remaining tomato paste into 1 cup of water to dissolve it. Add this to the meatballs, plus enough water to almost cover them.

Cover and bring to a boil. Reduce heat and allow to simmer slowly for 20 minutes. Either serve as is, or arrange around couscous or rice. Makes 25 meatballs.

Note: I prefer frozen artichoke bottoms to canned, especially those available in Middle Eastern markets. They hold together much better.

This recipe was adapted from one by Mrs. Pryzant.

Rub chicken with some of the garlic and sprinkle with salt and pepper to taste.

Heat oil in a Dutch oven or other frying pan, brown the chicken on all sides and remove, leaving oil in pan.

Heat remaining garlic and tomatoes in olive oil in pan. Return chicken to pan, arranging the tomatoes around it. Add the cilantro or parsley, reserving a bit for garnish. Cover and simmer slowly for about 1½ hours or until sauce almost looks like honey. Serve with rice or couscous and sprinkle with the remaining cilantro or parsley. Makes 6 servings.