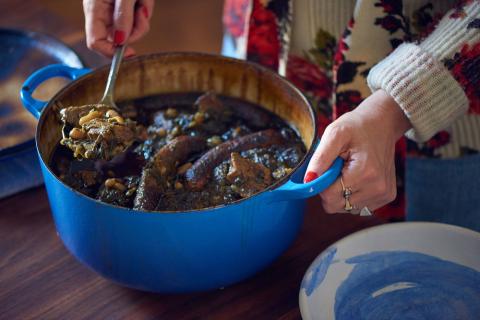 “We’re living in the grandmother era,” says Lior Lev Sercarz, a spice blender based in Manhattan. “Until 15 years ago or so, none of the chefs wanted to serve what we ate at home. It wasn’t cool, it wasn’t sexy.” But, that has shifted, says Lior. For him, that first happened early in his career when he was working at Daniel, one of New York’s most revered restaurants.

Chef Daniel Boulud “ran through the hallways and said: ‘We have a big problem,’” Lior recalls. The chef had agreed to cater a Tunisian bat mitzvah, but didn’t know how to prepare Tunisian dishes. In an effort to impress the chef, Lior said he would take care of it. It was only after, that Lior realized: “Oh shoot. What do I do?” Lior had grown up on Kibbutz Dan in the Galilee, eating Tunisian food like pkaila a stew of burnt spinach, beans and sausage, but had little experience cooking it.

“I remember my aunt getting married and my grandmother insisting she would make [pkaila] for the whole kibbutz,” he says. “That’s a vivid memory for me — in the kitchen with all of these Polish and Hungarian women who had no idea what she was doing.”

His grandmother Pnina was a skilled and passionate Tunisian cook despite being raised in Transylvania. In her teens, she left her orthodox family to make aliyah with the secular Zionist movement Hashomer Hatzair. She faced a roadblock in Italy where boats departed from. “She needed papers,” Lior explains. Married immigrants were given preferential treatment, he says. Eager to board a boat, she married a stranger who was also making aliyah. “They got to Israel and they both said goodbye. I don’t know if they saw each other again, [but] they stayed in touch” he adds.

When she arrived, Pnina lived in Kfar Saba, outside of Tel Aviv, where she met Izak, Lior’s grandfather, in a camp where young Zionists were trained to form kibbutzs. He was Tunisian, from Sfax, a small city along Tunisia’s coast. With little of her family surviving the war, “My grandfather’s family became her new family,” Lior says. She adopted their traditions and recipes and together the couple helped found Kibbutz Dan near Israel’s most northern border. “I think sometimes, she was more Tunisian than him,” Lior jokes.

Despite living in a communal children’s home of the kibbutz, Lior spent many afternoons with his grandparents during a “visiting hour” of sorts. When Lior was little, his grandfather would gather capers from around the kibbutz to pickle for the family and would rub toast with garlic and slick it with butter and harissa for an afternoon snack for the two of them. But it was Pnina, who was the family chef.

Some of the Tunisian culinary traditions she adopted, including the festive pkaila, were passed from her to Lior. “My mother maybe made pkaila once,” he explains.

Still, when Lior was in the kitchen at Daniel, it was his mother who he called frantically with the hope that she could help him master the recipe. She put him in touch with a cousin who spent three hours on the phone with him, teaching Lior to make the family recipe. The dish impressed Daniel and Lior’s fellow cooks so much that it appeared as a special at the restaurant for a time.

Today, Lior says he doesn’t need a special occasion to make the recipe. “Every time I tell [my mom] I made it, she’s like ‘It’s so complicated.’” But it’s not, he promises. The signature flavor comes from burning the spinach. And, Lior adds: “It’s every cook’s dream to be able to burn something and get a good result.”

Lior shared a version of this story during our live storytelling event, Schmaltzy, on October 3rd. Listen here: